WASHINGTON — The White House said on Tuesday that the British man who was holding hostages at a Colleyville synagogue entered the United States without issue because US terrorism databases did not have a red flag, even s he had been investigated by the British security service MI5 as a potential terrorist.

Hostage taker Malik Faisal Akram, 44, was on MI5’s watch list as a ‘subject of interest’ in 2020 and was investigated that year, the BBC reported.

British authorities have never shared suspicions that would have placed him on a US no-fly list, a US official said, likely because the investigation came to no conclusion that he posed a threat imminent.

“He was checked multiple times against U.S. government databases prior to entering the country, and the U.S. government had no derogatory information about the individual in our systems at the time of his entry,” said White House Press Secretary Jen Psaki during the daily briefing. .

Akram died Saturday after an 11-hour standoff at Congregation Beth Israel in Colleyville, northeast of Fort Worth. The rabbi and three worshipers who were also being held hostage managed to escape. Law enforcement then stormed the building and shot Akram, whom the FBI identified as the only suspect in the incident.

Akram arrived in the United States on December 29 on a flight to John F. Kennedy International Airport in New York, according to US authorities.

“We are certainly looking back…what happened to learn every possible lesson to prevent attacks like this in the future,” Psaki said.

By 2021, MI5 had moved Akram, who had a criminal record in Britain, off its list of “former subjects of interest” and no longer considered him a threat, according to the BBC.

Friends and relatives say he suffered from mental illness and his condition worsened. Some expressed surprise that he was allowed to travel to the United States, according to British media.

During the standoff, Akram repeatedly called for the release of Aafia Siddiqui, a US-educated Pakistani with close ties to al-Qaeda, serving an 86-year sentence in a nearby federal prison in Fort Worth. Siddiqui, was convicted in 2010 of shooting army and FBI interrogators.

The self-proclaimed mastermind of the September 11, 2001 attacks, Khalid Sheikh Mohammad – whose nephew was briefly married to Siddiqui – told his own interrogators that she acted as a courier and performed other vital duties, although she was not the shooting was condemned.

A number of jihadist groups have sought to trade Siddiqui for hostages since his capture. She studied biology at MIT and has a PhD in neurobiology from Brandeis University. When she was captured in Afghanistan in 2008, she had instructions for making a dirty bomb and documents pointing to targets in New York, including the Statue of Liberty and the Empire State Building. 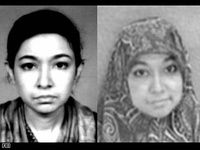