(RNS) — It’s been 30 years since the Washington Post published an article about Christian televangelists, describing their followers as “mostly poor, uneducated, and easy to command.” The pushback was immediate and overwhelming, as thousands flooded the Post’s switchboard and letters poured in to its editors after Pat Robertson – a Yale Law School alumnus himself – read the offensive passage from his TV show, “The 700 Club”.

It was a turning point in journalism that woke many mainstream media to the reality of the demographics and power of evangelicals.

Yet the prejudice that churches, mosques and synagogues are filled with people with low levels of education persists. The common assumption is that a formal education, especially a college degree, is antithetical to religious affiliation.

Even a cursory examination of recent data reveals that the exact opposite is true: those most likely to be religiously unaffiliated are those with the lowest levels of formal education. Which group is most likely to align with a religious tradition? Those who have obtained a university degree or higher.

The Cooperative Election Study, one of the largest publicly available surveys in the United States, began in 2008. Over the next 14 years, Americans who earned no more than a college degree secondary school graduates were more likely to report no religious affiliation than university graduates. . In 2020, 38% of those who did not complete high school described their religion as atheist, agnostic or nothing in particular. Of those who had completed higher education, only 32% said they were among those not affiliated with any religious community, a group known as nuns.

This same finding is true in larger, more granular datasets. The Nationscape survey has a total sample of over 475,000 respondents and contains a large number of people at all levels of education, including nearly 9,000 respondents with PhDs.

Being zero is most strongly correlated, at 32%, with those who have not completed high school. About a quarter of people with a high school diploma or four years of college are no, and among those with a master’s degree, only a fifth say they have no religious affiliation. 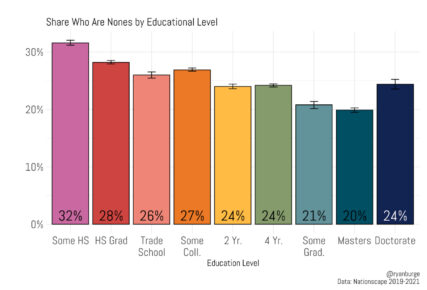 When the distribution of religious traditions is visualized by level of education, this relationship between these two factors becomes clearer. The share of respondents who identify as Christians (Protestants + Catholics + Righteous Christians) continues to rise, from 61% for those with the lowest levels of education to 69% for those who have taken courses in second cycle.

It should also be noted that the share of atheists and agnostics does not increase with the level of education either. It’s 8% of those with a high school diploma and 9% of those with a master’s degree.

However, the relationship between educational attainment and religiosity changes when people are asked about the nature of their beliefs. Religion is not just a matter of identifying with a religious tradition, after all; it often involves an actual psychological belief in a higher power.

RELATED: Public funds for students in religious schools? Supreme Court Says ‘Yes’ in Maine Case – But Consequences Could Go Beyond The certainty about the existence of a higher power therefore seems to waver a little with a higher level of education, despite an increased likelihood of being linked to a religious tradition. This finding was replicated in a recent study published in the American Sociological Review which concluded that education appears to move individuals away from moral absolutism toward moral relativism. This effect is stronger among those majoring in the humanities, arts, social sciences, or related fields.

This evidence seems to say that educated Americans are drawn to the community aspects that religion offers, but may be more willing to question what comes from the pulpit. This is perhaps not a surprising result, given that higher education encourages discussion and debate – and perhaps also, the desire to belong.

(Ryan Burge is assistant professor of political science at Eastern Illinois University, pastor of the American Baptist Church, and author of “The Nones: Where They Came From, Who They Are, and Where They Are Going”. He can be contacted on Twitter at @ryanburge. The views expressed in this commentary do not necessarily reflect those of Religion News Service.)