Many factors go into choosing a career: personal aptitude, parental expectations, educational opportunities, serendipity. For Sally Murray, it was simpler: she felt an impulse from God.

And so it was that in 2018 she quit her job as a full-time physiotherapist, moved her family from suburban London to rural Derbyshire and set up an ice cream parlor in the quaint tourist village of Milford.

Along with sharing the delights of her spiced blackberry and apple crumble ice cream, Murray is passionate about using her small business to help victims of human trafficking – a cause she attributes directly to her faith. Christian. “My favorite verse in the Bible is Proverbs 31: ‘Speak for the voiceless, bring about justice for all the dispossessed,’” says Murray, 53.

To that end, Just Ice, which she runs with her husband Gavin, a former Baptist pastor, currently employs two trafficking survivors. Whenever possible, the pair also seeks suppliers who share the same philosophy.

Nor is it a uniquely Christian phenomenon. Strong religious stances inspire a host of business enterprises around the world, from providers of Islamic finance and Buddhist healthcare to purveyors of kosher food and Ayurvedic medicine.

Yet the rise of the modern “profit for a purpose” movement, to use Murray’s phrase, is inspiring a new generation of religious believers to connect their spiritual and professional lives.

There’s a logical confluence between the two, says Rachael Saunders, deputy director of the Institute of Business Ethics, a UK charity that promotes high standards of business behavior. Company founders or people appointed to leadership positions “naturally think” about the difference they want to make, she adds.

“People for whom faith is important will likely immediately see that contributing to society can be a part of it, either because of their religious teaching or because they have seen their faith community play this role of service,” she says. .

It’s a connection James Perry also noted in his role as a board member of B Lab, an organizer of the nascent B Corporation movement – a global network of companies holding themselves legally accountable to their workers, suppliers and other stakeholders (in addition to their shareholders).

“I’m continually surprised at how many people I meet through B Lab who have some form of faith or spiritual life,” he says. “They tend not to wear it on their sleeve, but that’s a big part of why they do what they do.”

The link between faith, business and social purpose is the subject of a recent report published by the Jubilee Centre, a Christian charity based in Cambridge, East England.

The faith-based businesses studied in the report adhere to traditional principles of business ethics, such as fair compensation, dignified work and community investment. Yet research also identifies a growing appetite to turn market mechanisms toward the cause of social justice and environmental stewardship.

“It’s not hard to see how being a teacher or a nurse or a carer can be a sincere calling, but the idea that private sector roles can also be professional and even missionary is definitely growing,” says Tim Thorlby , from the Jubilee Centre. director.

Capitalism works best when we use its mechanisms to improve society and not just the financial situation of the upper echelons of society.

A case in point is Gloucestershire-based coffee roaster Ethical Addictions. Motivated by the biblical injunction to ‘love your neighbour’, the owners of the company decided early on to bypass the middlemen in the coffee industry and source their supplies directly from the farmers themselves. Not only does this direct trade model allow the payment of an above-market price, but the owners of the business also commit to undertaking local education projects and other philanthropic investments.

“We’ve been asked to love God and love our neighbor, and we have to live it, whether as a clergyman, sweeping the roads, or running a business,” says Ian Meredith, co-owner of Ethical Additions. and an evangelical Christian.

In addition to a powerful sense of purpose and internal harmony, some faith-driven entrepreneurs report finding remarkable consistency between their religious principles and the principles of a sustainable business.

Pooran Desai makes precisely this point. Raised Hindu but heavily influenced by Taoist teaching, Desai established the environmental consultancy Bioregional in 1994. He credits Taoism’s emphasis on the interconnectedness of all things and the search for balance as strengths drivers throughout his career.

A notable manifestation is the One Planet Living framework, an influential decision support tool created by Bioregional and the conservation group WWF in 2002. The framework, which promotes ideas of ecological balance, has since been used by hundreds businesses to better manage their environment. footprint.

Desai isn’t the only one to find such synchronicity. Kai Whiting, lecturer in sustainability at the Catholic University of Leuven in Belgium and an avid follower of Stoicism, sees the same in his chosen philosophy.

The Stoics seek what the ancient Greeks called eudemonia, variously translated as “happiness”, “fulfilment”, “well-being” or simply “the good life”. (The term “Stoicism” derives from Stoa Poikileor “Painted Porch”, the name of the colonnade where Zeno of Citium, the first proponent of philosophy, taught).

“Stoicism is strongly focused on how the virtuous person can do their part to advance the common good. It enables an individual to make better decisions and have a better attitude when it comes to treating others, seeking employment opportunities, adjusting their career, or coming up with the goals of an entire organization. says Whiting.

If we view business as the aggregation of all these decisions, as Whiting does, then the implications for business are profound. He adds: “Capitalism works best when we use its mechanisms to improve society and not just the financial situation of the upper echelons of society.

True as it may be, modern business remains a stubbornly secular beast. Try to cite inspiration from the Bible or Hindu scriptures, the Bhagavad-Gita in a strategic meeting and you can expect to be promptly fired.

That doesn’t stop owners from trying to incorporate religious practices into the workplace. When Huib van Bockel left his job as head of marketing at Red Bull to create his own brand of energy drinks, for example, he wanted his new venture to reflect some of the Buddhist traditions he himself found inspiring.

The results range from what seems mundane, like starting the work week with everyone cleaning the office in silent contemplation, to what is potentially radical, like a non-hierarchical approach to staff feedback and an injunction to ” Love your buyer” (as Bockel reasons: “People feel bad if you don’t like them.”).

That said, faith is a personal feeling and institutionalizing it in a company’s culture is difficult. Michael Zigarelli, professor of leadership and strategy at Messiah University in Pennsylvania, explores the integration of faith and business in his book Christian-Owned Businesses: What Does It Look Like When a Follower of Jesus Runs a Business?

Common practices he identifies among organizations seeking to stick to biblical principles include hiring people with a similar worldview, codifying the founder’s religious stance into a formal mission statement, and the transmission of the business to descendants imbued with the same denominational values.

Notably, of the 50 businesses profiled in his book, the vast majority are family businesses, while most of the rest are either employee-owned or controlled by a charitable foundation.

Private ownership gives faith-based businesses more freedom to live out their beliefs. Zigarelli cites the example of Pittsburgh-based Bridgeway Capital, a “mission-driven” lender whose bylaws commit it to donating at least half of its profits to charity. 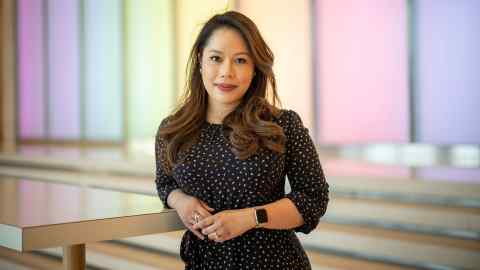 Meredith of Ethical Addictions knows – and exploits – this advantage. When he sought to raise funds to support a recent expansion plan, he left investors in no doubt what they were buying into.

“I said I didn’t want to answer you in three years why we spent £10,000 on a water project instead of giving extra dividends. . . you should know by now, we just don’t have that conversation,” he says.

However, religious faith is no shield against the harsh realities of the marketplace. After enduring the Covid-19 pandemic, Sally Murray’s ice cream business is now facing high inflation and a long winter.

Yet his sense of calling remains as strong as ever. As she puts it philosophically, “Because we took greater risks and God had to show up for us, I would say our faith actually grew.