In recent decades, American evangelism has moved away from the labels, symbols, and religious buildings that defined the church.

Many newer churches do not contain stained glass windows, crosses, or traditional sanctuary configurations. They tend to adopt contemporary names, leaving out denominational labels or other religious language. Along with these changes, the faithful have changed the way they talk about their faith; think of phrases like “This is not a religion; it’s a relationship.

These trends have had a real impact on how young people understand their religious identity. Evangelical Protestants have debated for years the definition and usefulness of the label “evangelical”. Now it seems that the “Protestant” is also losing its place.

New research shows a significant portion of Americans no longer cling to the word “Protestant” as older Americans have for generations – a finding that has implications for those who study and measure religious affiliation as well as for the religious communities themselves.

This idea comes from a weekly survey called Nationscape, which Democracy Fund started in mid-2019 and is the largest publicly available survey dataset in history, with almost half a million people. interviewed.

When asked about religion, survey administrators gave respondents the option to self-identify as Protestant, Catholic, Mormon, Orthodox, or Christian, among other options for other faiths. It is the “Christian” response that makes the difference. Surveys generally require people to specify a tradition within Christianity. But when given the option of not choosing the “Protestant” label, many who attend Protestant churches do not.

Older Americans still clearly identify as Protestants. About a third of people in their 70s said they were Protestant, with just 10 percent indicating they were Christians.

The “Catholic” label seems less impacted by age; 18% of young people say they are Catholic against 25% of those 75 and over.

While it can be problematic to find a causal link for the results of a religious identity survey, the change fits with the recent history of Protestant Christianity. The rise of non-denominational Christianity and the decline of mainstream Protestantism began in the 1980s. People in their fifties and younger grew up in a world where Protestant terminology was falling out of favor. 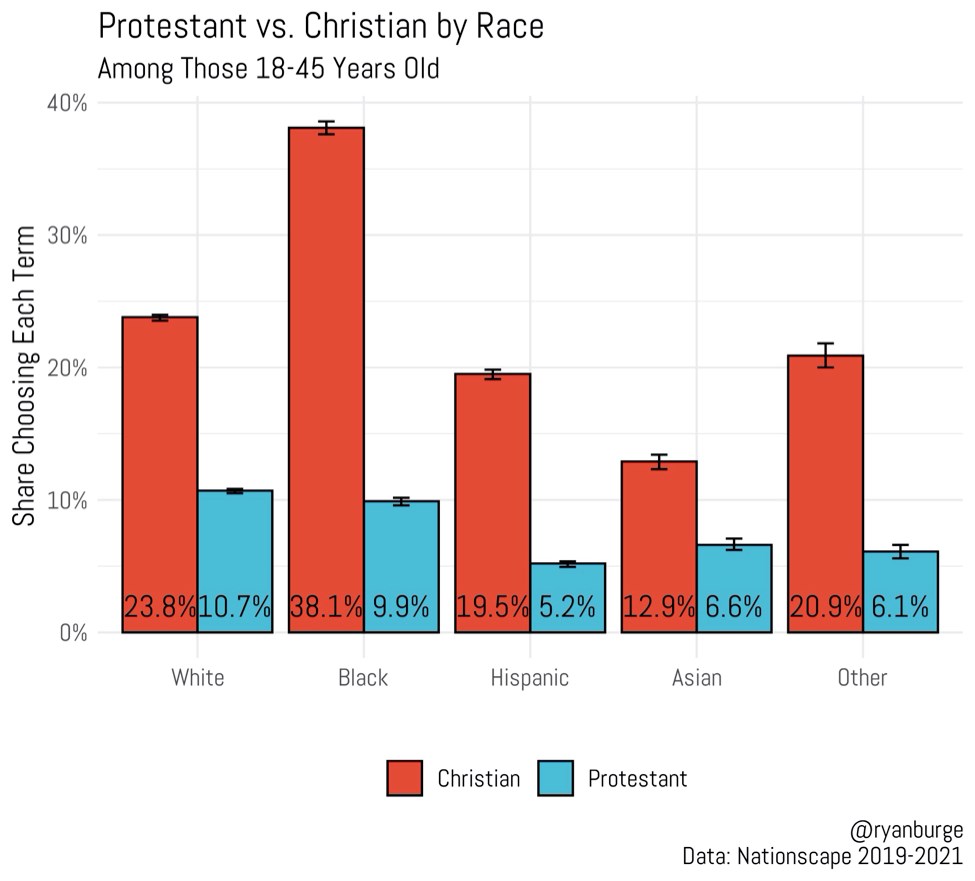 However, race is also a factor in the gap between Protestants and Christians. Among young Americans, ages 18 to 45, African Americans have the highest levels of religiosity and were more likely than other racial groups to prefer Christians over Protestants. Thirty-eight percent of black respondents said they were Christians, compared to 10 percent who said they were Protestants.

Hispanic youth are also almost four times more likely to choose the Christian option over Protestant. The gap is smaller among white respondents (24% vs. 11%) and those who identify as Asian (13% vs. 7%).

In a new article published last month at Journal for the scientific study of religion, I tried to find other factors explaining why people cling to the Protestant identity or prefer the Christian label.

Data indicates that those with higher levels of education are more likely to identify as Protestants, but even among the youngest with a graduate degree, most prefer Christians over Protestants.

While the Nationscape survey does not include many questions related specifically to religion, it does ask respondents about politics. There is some evidence that young people who identify as Protestants are more likely to say they are Democrats than those who identify as Christians. For example, 27% of white Protestants were Democrats, compared to 20% of white Christians. This gap also appears for black and Hispanic respondents.

This may be because mainstream churches, such as United Methodists and Episcopalians, who are more likely to still use Protestant as a label in sermons and literature, tend to be more politically moderate.

I am a pastor and an academic, and the results of the Nationscape survey are disturbing from both perspectives. Young Americans don’t seem very familiar with the term Protestant. If polls continue to ask questions about Protestant identity – as most still do – and the average American does not understand this distinction, then sociologists run the very real risk of misjudging religion.

Fortunately, the overall makeup of religion in the Nationscape survey does not appear to be much different from other surveys that only include the Protestant option. While Protestants are combined with Christians in the survey, their overall makeup does not differ significantly from Protestants in other data. But this may not always be the case.

From a social science perspective, how people identify (or not) with a religious tradition is extremely important. One of the key questions that human beings face is “Who am I?” And who are people like me? Religion is one of the ways Americans help themselves sort out in social space. Protestant identity helps Baptists, Methodists, and Episcopalians know that they have many things in common. When those labels start to fade, there are fewer social signs to help people find like-minded people.

For churches, a bigger problem may be that many people sitting in the pews may have no idea of ​​their church’s denominational affiliation or how it relates to the larger history of the church. This type of religious literacy – an understanding of how the basic tenets of their tradition differ from other Christians – can be helpful in understanding their Catholic, Mormon, and Orthodox neighbors, but also for a deeper understanding of the idiosyncrasies of their own. faith as Protestants. .

Taking an unlabeled approach to spirituality seems to be the current trend, but as this data indicates, it has very real impacts on how Americans understand their place in the religious world.

Ryan Burge is an assistant professor of political science at Eastern Illinois University. His research appears on the Religion in Public site, and he tweets at @ryanburge.