Less than a third of all Millennials (25-39) identify as Christian, according to another breakdown of religious census data by age, released by the Australian Bureau of Statistics.

Millennials are the least likely to affiliate with Christianity, at 30.6%, or religion in general, at just 45.5%.

And they are only twice as likely to be Christians of any denomination as to adhere to another religion, despite the small size of minority denominations.

This fact was represented in data on the median age of non-Christian religions such as Hinduism (31 years), Sikhism (30 years) and Islam (28 years) and no religion (33 years).

“A separate batch of polling data… found that only a minority of voters think religious Australians suffer from discrimination.”

The ABS religious breakdown said the average age of Christian affiliation in Australia was 47, with Anglicans leading the pack with an average of 56.

The decline of Anglican membership was one of the main stories in the 2021 census, with the Church of England losing nearly one in five members since 2016, a total loss of more than 600,000, taking its share overall population at only 9.8. percent.

A separate batch of polling data, from the 2022 Australian Cooperative Election Study (ACES) conducted by YouGov and various Australian universities, found that only a minority of voters believe religious Australians suffer from discrimination.

Only 27% of respondents agreed that “Australians who have religious beliefs face a lot of discrimination”. 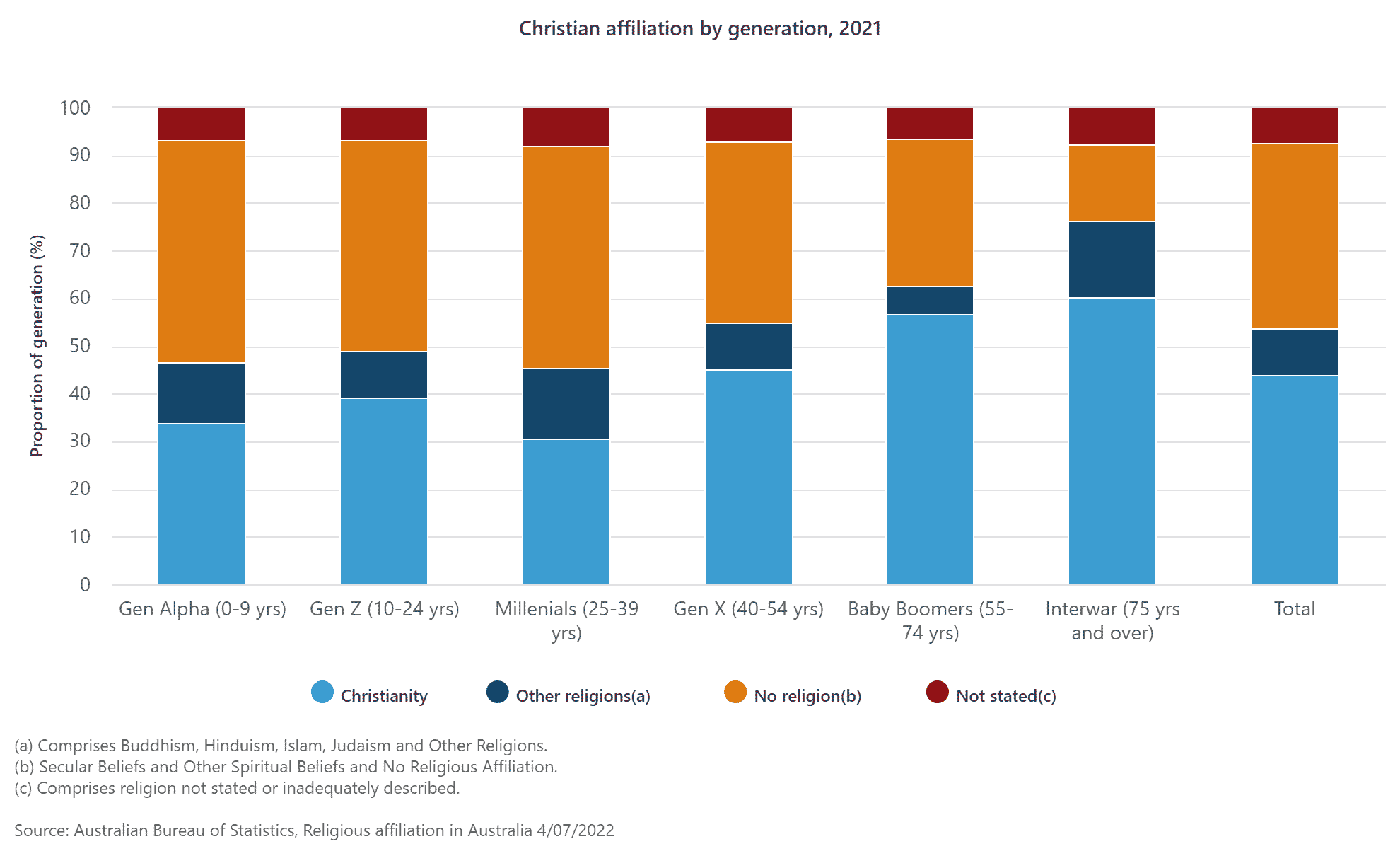 Forty-two percent had a neutral view and 31% disagreed, according to an initial report on the data – not yet available – published in The Conversation.

A majority of respondents (67%) disagreed that “religious schools should be able to refuse to employ staff because of their sexual orientation,” the report says, with similar figures for the refusal of employment on the basis of transgender identity.

But most Australians don’t think the policy is ‘too focused on the rights of religious people’, with just 39 per cent agreeing and 61 per cent disagreeing or giving a neutral view.

“Our new data reinforces the extent of voter resistance to aspects of the ‘religious freedoms’ agenda in the run-up to the election,” wrote the authors of The Conversation report, three academics from Macquarie University.

“Clearly, the Church does not occupy the privileged position in our society that it once had. In such a situation, my firm conviction is that we must follow the advice given by Pope Benedict and reiterated by Pope Francis.

The president of the Australian Conference of Catholic Bishops, Archbishop Timothy Costelloe, SDB, said faith is a gift that cannot be forced on people.

“Clearly, the Church does not occupy the privileged position in our society that it once had. In such a situation, my firm conviction is that we must follow the advice given by Pope Benedict (and, I believe, by John Paul II before him) and reiterated by Pope Francis.

“We should constantly propose but never impose our beliefs on others.”