Easter Sunday is perhaps the most important event in the religious calendar. All Christians celebrate according to their denomination’s traditions and interpretation of the Bible, but the Orthodox Church likes to do things slightly differently by celebrating Easter on an entirely different day!

Orthodox Easter is celebrated around the world but is particularly concentrated in Greece, Cyprus and Eastern Europe. Being part Greek-Cypriot, my family naturally celebrates Holy Week according to Greek traditions, but the services and theology from which they stem are quite universal.

So a Ukrainian, for example, could celebrate Easter in Greece and vice versa. This is extremely important given current events like the war in Ukraine, as it means that refugees can practice their faith freely and safely, even if there are no churches of their nationality nearby.

How do we celebrate Holy Week?

The Orthodox Easter period begins in the same way as other denominations as it follows the traditions associated with Lent. In Greece, Lent begins with “Clean Monday” (called “Green Monday” in Cyprus), stemming from the belief that believers should start the holiday with a “pure heart”.

Many devout Orthodox Christians undertake fasting at this time, called “νηστεία” in Greek (pronounced nésteia [nee-stee-ia]). The faithful are expected to give up meat, eggs and dairy products throughout the 40 days of Lent – ​​although for health reasons many simply give up meat.

There are several days set aside for prayer and worship throughout the Easter period. One of them is March 25, the Annunciation of the Virgin Mary, where Mary was informed by Archangel Gabriel that she was pregnant with the Son of God.

March 25 is also Greek Independence Day as it was chosen as the date to mark the start of the Greek Revolution of 1821, an uprising against the occupying Ottoman Empire that would trigger the successful Greek War of Independence ( 1821-1829).

Another important day is Palm Sunday, because in the gospels it is the day when Jesus entered Jerusalem. It is also the beginning of Holy Week in all Christian denominations. The occasion is marked by a special religious service with several different services, mainly Vespers, which continue throughout Holy Week.

These services culminate with Good Friday, the day Jesus was crucified. In the Orthodox Church, the service takes the form of a funeral, beginning at 8 p.m. and ending around 10 p.m. Halfway through the ceremony, the priest and singers lead a procession carrying a large crucifix around the church as if it were indeed a funeral.

It also serves to spread faith in the community and in the modern age people often get puzzled looks from people who just want to enjoy their Friday night on the town! They then continue this outside with the whole congregation following respectfully.

An epitaph (ἐπιτάφιος in Greek, pronounced epitáphios [ep-ee-taff-eos]) adorned with flowers is also carried during this part of the service. It is said to contain the body of Christ and is displayed at the front of the church throughout the service. When the procession enters the building, all members of the congregation pass under the epitaph to enter the church.

An epitaph believed to contain the body of Jesus Christ as part of the Greek Orthodox Good Friday service
Photo: Wikimedia Commons

Naturally, the biggest church service in Holy Week is on Easter Sunday (which actually takes place on Saturday evening) because that’s when Christ is resurrected. This year was actually my first time attending the Saturday service, as I usually just go there on Good Friday as the service properly ends around 3/4 in the morning! However, as I am now a night student, I decided to attend on Saturday evening, which was an interesting experience in itself.

The Saturday service begins with the usual prayers and singing, but as midnight approaches, things get interesting. Slowly the lights go out and the candles go out until the church is plunged into darkness. At midnight the Holy Light arrives to signify the resurrection. The priest then uses this sacred light to light a candle which he in turn uses to light the candles of the other faithful.

One by one the light spreads as each candle is lit until the Church is now bathed in light and the Son of God is now walking among us.

A candle lit with the Holy Light to signify the resurrection of Christ
Photo: Joe McFadden @The Mancunion

What happens on Easter Sunday?

Unsurprisingly, Easter Sunday is the best part of the religious holiday. This is when families get together, eat delicious food, and compete to see who has the strongest hard-boiled egg (yes, you read that right!).

Above all: the food

To celebrate Easter, Greeks traditionally eat lamb with a plethora of accompaniments because now is the time to crack the nestia.

Now my family’s traditions differ slightly from mainland Greece as we are actually Greek Cypriots, so there are variations in our cuisine that may not be the case for the mainland and its islands.

The main meal of Greek Cypriots is called Souvla (σούβλα [suv-la]). Similar to barbecue, Souvla consists of pieces of meat cooked on a long skewer over a charcoal fire in a Foukou (φουκού [fu-gu]). The meat is seasoned and cooked for 90 minutes to 3 hours according to family traditions.

Lamb is the most common meat used for Souvla at Easter, but pork and chicken are also cooked. The Souvla is accompanied by a spicy Cypriot sausage called Loukaniko (λουκάνικο [loo-kan-ee-gu]) and Sheftalia (σεφταλιά [sheft-al-ya]), a homemade sausage, served with Pitta bread and a Tzatziki dip. 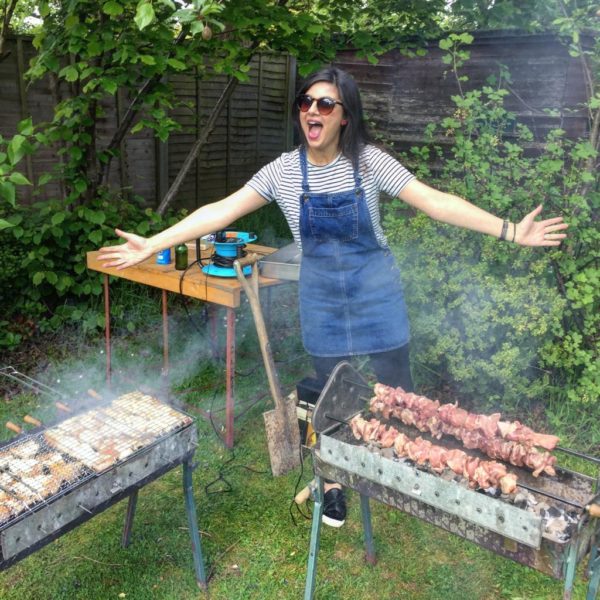 My cousin Christina shows her Souvla cooking on the Foukou
Photo: Christina Klerides-Maos

For dessert, a traditional Cypriot savory pastry called Flaounes (φλαούνες [flow-ou-nes]) is served. These are filled with cheese and are very specific to Easter, being prepared earlier in Holy Week.

On Maundy Thursday, eggs are hard-boiled and dyed red to symbolize the blood of Christ; on Easter Sunday, each family member selects an egg at random, then crushes them together (top-to-top and bottom-to-bottom) to determine who has the strongest egg.

Breaking their eggs together, the offensive player shouts “Christos Anesti!” [Χριστός ἀνέστη]meaning “Christ is risen” and the defending player responds with “Alithos Anesti [Αληθώς ανέστη]which translates to “Truly he is risen.” The winner is the player whose egg remains unharmed for the entire game. After the game, the eggs are shelled and eaten. 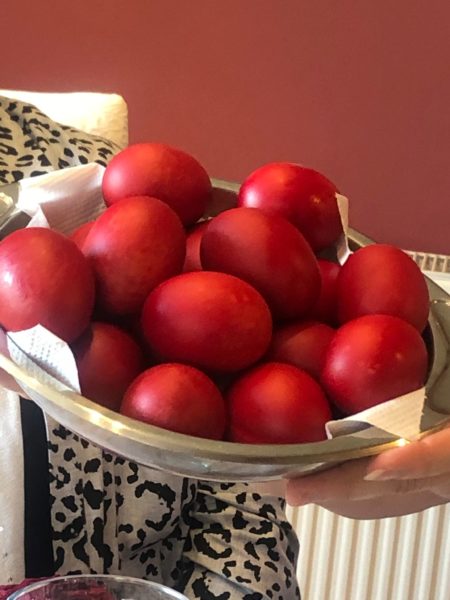 For me, Easter is first and foremost a time when families come together and celebrate their culture. Personally, my religious views would be described as skeptical at best, but despite my misgivings about organized religion, Greek Orthodox traditions are still extremely important to me.

My cross (or σταυρώνω in Greek) with my name engraved on it. Despite my lack of religious views, I wear it every time I go to church because it connects me to my culture and also has sentimental value because my godmother baptized me with it.
Photo: Joe McFadden @ The Mancunion

Growing up in the Greek Orthodox religion, going to church was still an important formative experience. Subsequently, I conclude that I feel more an attachment to the cultural element and the community it encompasses rather than any overt religious reasoning. The Easter period is an incredibly busy time for those who are devout believers, like my grandmother (γιαγιά) and my uncle, and it is their commitment and hard work that makes Easter Sunday so enjoyable for me, my brother and our cousins.

(I would like to thank my mother for her patience in helping me with this article by answering all my questions as I don’t know enough about my own culture as my writing here may imply!)