Young people who identify as very religious do better than their non-religious peers, according to State of Religion and Young People 2021 from the Springtide Research Institute.

Springtide surveyed 10,274 young people aged 13 to 25 (Gen Z) and found that experiences of uncertainty were quite consistent between religious and non-religious respondents. Among those who identified themselves as “very religious”, 54% said they had lived with uncertainty, compared to 55% of those who were “not at all religious”.

In support of this claim, the report found that religiosity is positively correlated with fulfillment. For all indicators, including work, relationship, and physical and mental health, highly religious respondents reported thriving at higher rates than their non-religious peers.

These higher levels of fulfillment could be related to religious people’s beliefs about purpose and meaning, which are generally associated with increased happiness and longevity. Very religious youth are more than twice as likely to say that what they do for a lifetime is valuable and useful to them, compared to those who are not at all religious.

“[Faith] teaches you that no matter what, everything will be fine, and faith itself can really help you, ”said Yadi, 20, in an interview with Springtide. “It gives us something to look forward to, a destination.”

Thrive outside the benches

Although very religious youth thrive more than non-religious ones, religious leaders may not detect it. It may surprise some pastors that the majority of young people consider themselves religious (71%) or spiritual (78%). However, few people find that their spiritual curiosities are satisfied by a church, tradition or institution.

Young people who identify as religious increasingly build their faith by combining elements from various religious and non-religious sources, rather than receiving all of these things from a single, intact system or tradition. Springtide calls this “the unbundled faith”. 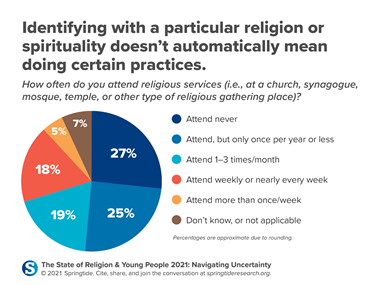 Additionally, less than half (40%) of very religious youth have found it helpful to connect with their faith community during difficult or uncertain times. Instead, they are more likely to turn to friends or engage in hobbies such as baking, painting, sports, or music.

While they may not turn to churches as often, young people still need the adults in their lives, including pastors, to guide them through difficult and uncertain times.

In last year’s State of Religion and Youth 2020, Springtide found that as the number of adults trusted in a young person’s life increased, so did the level of loneliness and d the uselessness they felt was diminishing. While 24% of youth without an adult mentor say they never feel like their life has meaning and purpose, with just one adult mentor the number has dropped to 6%. A similar trend has been held true for loneliness – while 58% of those without an adult mentor say they sometimes or always have no one to talk to, that number has dropped to 48% with a only adult mentor.

When engaging with young people, pastors should not try to fit them into a pre-made faith or religious system. Our data suggests that would be a huge hijack. Instead, the goal of religious leaders should be to stay in conversation with young people for as long as possible and to ask genuine questions with genuine curiosity. Generation Z is exploring everything, constantly asking questions and seeking advice. However, they are not impressed with the fancy titles and pedigrees. In an increasingly digital society that prioritizes connectivity over true connection, what really impresses young people is relationships.

Although young people can express their religiosity in new and unexpected ways, their investment always pays off. If religious leaders are willing to make room for spiritual conversations that go beyond an ‘inside’ or ‘outside’, ‘this’ or ‘that’ way of compartmentalizing, they can be the voices. confidence that young people need to thrive in these times.