[Episcopal News Service] Most Americans see Jesus as an important spiritual figure. More than 30% of Americans have decreased their participation in religious activities during the COVID-19 pandemic. And only one in 10 believe those who attacked the US Capitol on January 6, 2021 were associated with organized religion.

These are some of the findings of a nationwide study commissioned by the Episcopal Church and conducted by polling firm Ipsos. The results of the “Jesus in America” ​​study, released March 9, highlight the broad religious outlook of a diverse sample of Americans, including those who identify as non-religious.

Episcopal leaders say the study underscores both the popularity of Jesus’ teachings and how Christians are often seen as disrespecting those teachings.

“We are encouraged that research shows that Americans still find Jesus compelling, but we also see that the behavior of many of his followers is a problem, and it’s not just some Christians: they’re all Christians. “said Presiding Bishop Michael Curry in a press release. press release announcing the study. “This is a wake-up call for us, and based on what we have learned, we are refocusing our efforts on being a church that looks and acts like Jesus and models its behavior after his teachings. Through this process, we hope to spark a renewal of love that encourages all Americans to love their neighbors better.

To conduct the study, global market researcher Ipsos surveyed 3,119 Americans, ages 18 and older, from November 22 through December 2 in English and Spanish, with a 2% margin of error. Findings will be used by Episcopal leaders to help plan for the post-pandemic church.

“The goal of the ‘Jesus in America’ research project was to identify the most compelling themes and narratives about Americans’ attitudes and perceptions about who Jesus is, his lasting importance and impact on society, how how the pandemic has shaped how people seek and find spiritual and religious fulfillment, and how Christians are currently viewed by non-Christians,” Amanda Skofstad, church public affairs officer, told Episcopal News Service in a written statement.

Christopher Moessner, who oversaw the study’s Ipsos research team, pointed out in an interview with ENS that the large national pool of respondents is representative of a wide range of religious denominations.

“We didn’t want to limit our audience to just Christians or just Americans who had a particular point of view. We wanted to poll all Americans, regardless of their religious beliefs or no religious beliefs,” said Moessner, senior vice president of opinion polls at Ipsos.

This approach helped the study more clearly examine common perceptions of Christianity and Christians in the United States. One question asked respondents what they thought was the most important teaching of Jesus. More than a third said “love your neighbour”, including almost a quarter of respondents who did not declare any religion. About 20% of all respondents answered “not judging others, without judging yourself first”, and those with no religion gave this answer at about the same rate.

“Few polls look at what you really believe about Jesus,” Moessner said. “This poll also sought to understand where the intersection between all faiths is. Where is the common ground? »

He highlighted the questions about activities offered by religious organizations that would be of most interest to respondents. Some of these findings were similar across faiths, with respondents generally emphasizing outdoor activities and helping others.

This disconnect points to a central reason why the church commissioned the study. Episcopal leaders hope that by better understanding public perceptions of Christianity, the church can more effectively spread its message of Jesus’ love and compassion contrary to what they see as distortions of the faith by some Christian leaders and policies.

Curry has taken up this cause prominently since 2018 when he joined an ecumenical group of Christian leaders to launch the Reclaiming Jesus initiative. Led by the Reverend Jim Wallis of Sojourners, it sought to address “a dangerous crisis of moral and political leadership at the highest levels of our government and in our churches” and to affirm what it means to be a follower of Jesus in today’s world. today. 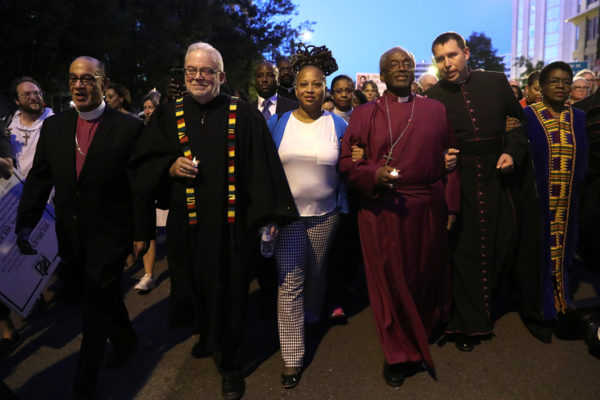 The Reverend Jim Wallis, second from left, and Presiding Bishop Michael Curry lead fellow clergy in a vigil titled ‘Reclaiming Integrity of the Faith During Political and Moral Crisis’ as they visit at the White House in May 2018. Photo: Reuters

Such efforts became urgent after rioting supporters of then-President Donald Trump stormed the US Capitol on January 6, 2021, seeking to block certification of Joe Biden’s election as president. Five people died, including a Capitol police officer.

At the time, Episcopal leaders lamented that some attackers displayed crosses and other Christian symbols on their flags, banners, placards and vestments – suggesting Christian identity was being “used violently by people who want to establish a nation in which power and privilege is held exclusively by white Christians,” the Reverend Gay Clark Jennings, Speaker of the House of Representatives, said at the January 2021 Executive Council meeting. “This violent and exclusion is on the rise in the US … We have a special responsibility to oppose it.

For the “Jesus in America” study, pollsters asked, “Do you think the events at the US Capitol on January 6 are associated with organized religion? Overall, 11% said yes, with wide variation between respondent groups. The study found that 24% of non-religious respondents answered this way.

When the 11% of respondents who said yes answered a follow-up question, 63% said they associated the attack more specifically with evangelical or Protestant Christians.

The study also produced data on how the pandemic has disrupted church attendance over the past two years. Asked about their “ability to participate in organized religious or spiritual activities”, 37% of mainstream Protestants said their participation had decreased, while 55% reported no change in their participation.

“Lent is a time of intentional reflection and action,” Curry said in a press release, “and we are especially mindful of our determination to continue to build meaningful and inclusive communities in our post-pandemic world that encourage all Americans to listen without judgment and celebrate differences.

– David Paulsen is an editor and reporter for Episcopal News Service. He can be reached at [email protected].